This tutorial is going to teach you about the different conformations (shapes) of the cyclohexane (C6H12) and the glucose (C6H12O6). 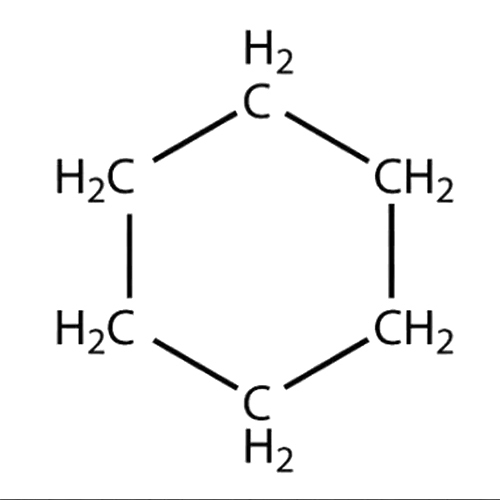 Its bond angles between the carbon atoms measure 120°, but is this really accurate? And is there more than one way to represent these tricky molecules?

To start of, what is a cyclohexane? Well, it is a cyclic hydrocarbon, formed by 6 carbon atoms in a hexagon, with each one bonding to two hydrogen atoms. The molecule is synthesized in millions of kilograms every year, and is used to produce adipic acid and caprolactam. These two are precursors (a compound that participates in a chemical reaction that produces another compound) to nylon, so thanks to the cyclohexane, we can wear fancy pantyhoses, brush our teeth with nylon brushes, as well as listen to beautiful acoustic guitars.

Alright enough chit chatting, let’s get down to business!

To start of we need to create the cyclohexane atom in SAMSON. This is done by placing 6 carbon atoms in a rough hexagone (the simulator will help us position it correctly), and then adding 2 hydrogen atoms to each carbon atom (that makes 12 hydrogen atoms in total). Now form the bonds between all these atoms and you should end up with something looking like this: 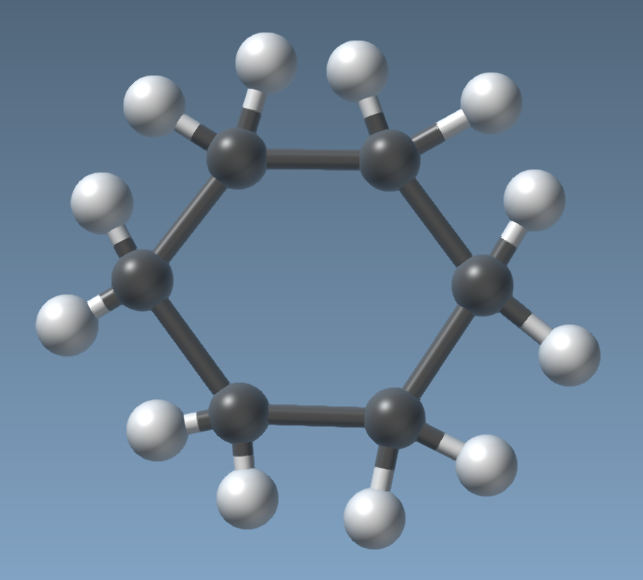 You’ve got something looking similar to this? The same amount of atoms atleast? Okay good, let us proceed to the next step, simulation.

We will be using the interaction model called Universal force field,with interactive modelling as our state updater. The step size will be set to 0,5 fs with 10 steps.

In the settings window for our interaction model (called universal force field) where we can set perception preferences and control bond settings, we can also see a column called UFF energies. The particular energy we are interested in is the Total energy [kJ/mol].

Figure 3: The settings window with the total energy

When you start the simulation by pressing the green play button, you will see the atom shrink, and its total energy level decrease. Why is that?

Well you might know that molecules are always trying to find ways to lower their energy, whether it is by forming bond with other atoms or molecules, or by arranging themselves into new forms and shapes (called conformations). In this case, our cyclohexane is reforming its geometry in favor of one which reduces its potential energy. This specific conformation that we are going to look at in a moment is called the “chair conformation”.

N.B that your cyclohexane might not initially be in this conformation (if you are very unlucky and have somehow managed to arrange the atoms in such a manner that they are closer to one of the other conformations than the chair one), and in that case we will have to rearrange them to our desired conformation. Just use the mouse cursor button and drag the rightmost carbon atom downwards and the leftmost upwards, while making sure that the hydrogen atoms are pointing in the directions according to the picture below. 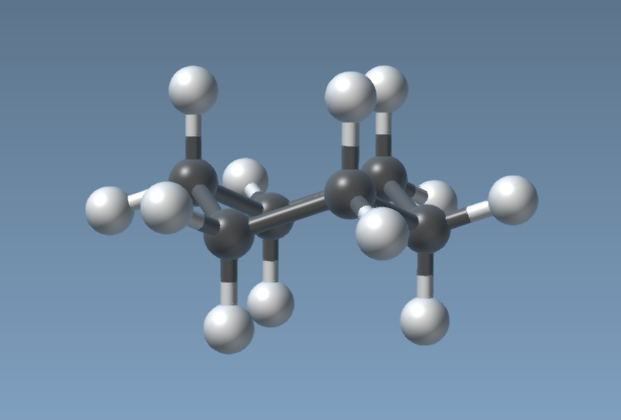 Figure 4: The chair conformation in SAMSON, pay attention the the positioning of the hydrogen atoms

By the time you have read this sentence, your molecule should have stabilized and we can start to analyze it.

Firstly what is its energy level (given in kJ/mol)? (Remember this number because we will need it in the near future)

So this the chair conformation, that is represented in the classic way like this: 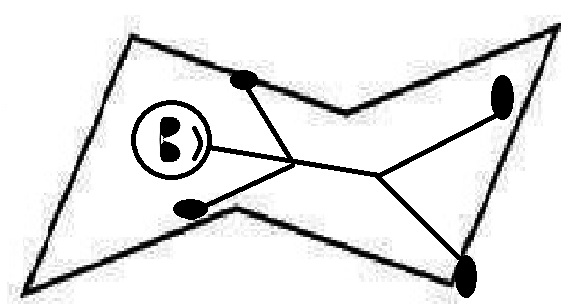 Figure 6: The reason it is called “the chair”

This is the geometry that gives the cyclohexane its lowest potential energy possible. Depending on the position of the hydrogen atoms, we give them different names. The ones pointing right up or down (north or south) are in what we call the axial position. These atoms are perpendicular to the plane of the carbon hexagon. The ones pointing out to the sides are in the equatorial position, and lie in the plane (parallell to it). Let’s hope that this picture below will clear things up. 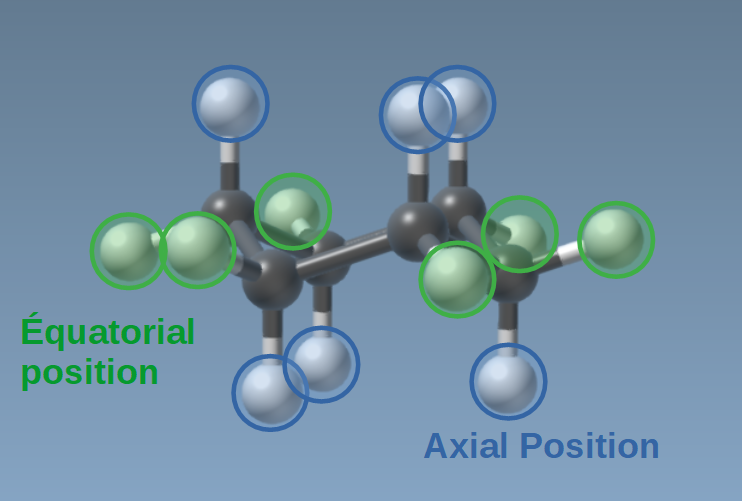 Figure 7: The equatorial and axial positions of the hydrogen atoms

Now we should try to pass to another conformation, namely “the twist-boat”. To do this, we will need to use the mouse cursor button

to move (or rather force) one of the outermost carbon atoms to point in the same direction (up or down) as the opposite one. This would look something like this:

Figure 8: Passing from “the chair” to “the twist-boat”

So this is the twist-boat conformation, and on paper (in a classic manner) it is described like this: 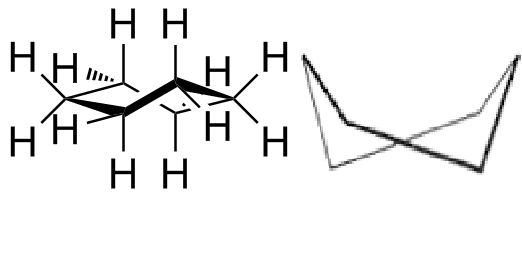 In the same settings windows as the last time, look for the total energy of our molecule. When the molecule seems to be stable (it doesn’t move anymore and the energy level seems to be constant), write down its energy level. Which conformation has the lowest energy?

Question: With help of the diagram below, explain the existence of multiple stable conformations for a cyclohexane, for example the chair and the twist-boat. 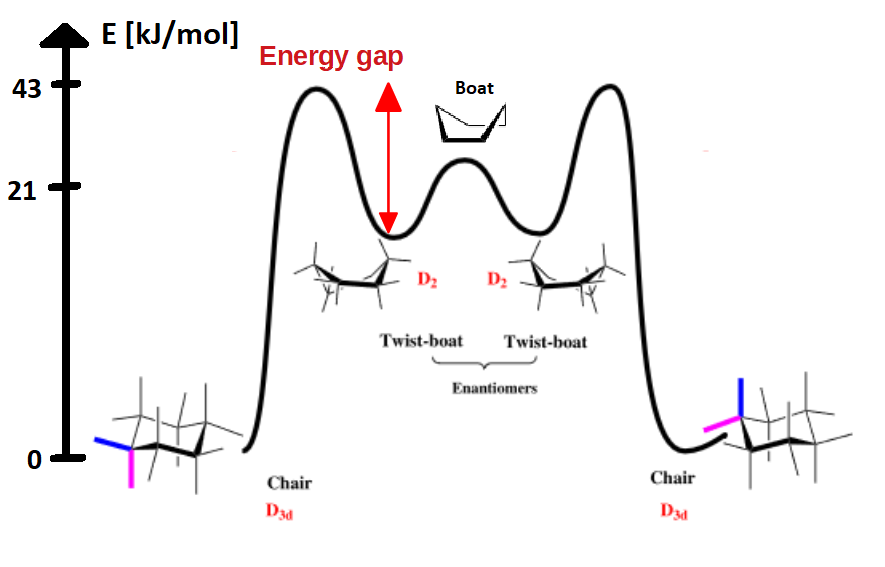 This phenomenon is not unique to the cyclohexane, and can actually be observed for the glucose molecule as well. Let us try to recreate some of the glucose conformations together!

First of all, what is glucose? We are sure you have all heard of the photosynthesis, the way our plants make their food, and how important it is for us. The two products of this essential reaction is oxygen (for us humans) and glucose, a simple sugar (monosaccharide) with the molecular formula C₆H₁₂O₆.

Now for the creation of the glucose molecule in SAMSON. It could be a little tricky to distinguish the different parts of the molecule from just a picture, so here they are given in order to ease things up for you guys.

Components of glucose: 5 carbon molecules and 1 oxygen in a hexagone, with 4 hydroxyl (OH) groups placed on the carbons, except for the one right next to the oxygen molecule within the hexagon. On this carbon we place CH₂OH group while also adding 5 hydrogens, one to each 5 carbons. With the help of this description and these photos, you should be able to recreate this molecule.

Figure 11: The glucose molecule in SAMSON (left) and in the Haworth projection (right)

Oh you already created it, good job that was fast! Now if we move the camera around, we can see that the molecule is completely flat, since we have only been working in one plane. So let’s apply a simulation and let SAMSON make it 3 dimensional for us.

However before we apply this simulation, please make sure to save our glucose molecule as a .pdb file somewhere on the computer where we can easily find it, since we will reuse it in another tutorial. This will save us some time in the future.

Alright, all saved? So same simualtion parameters as last time, Universal force field, with interactive modelling as our state updater. The step size of 0,5 fs with 10 steps.

Launch the simulation and watch our glucose molecule take a more natural look.

This first conformation is called the chair conformation. We can now move arond the exterior oxygen molecules to find in which postition (equatorial or axial) the glucose reaches its lowest energy level. What is this position and what is the energy level [kJ/mol]?

These different positions (equatorial or axial) give the type of glucose: alpha or beta. In a aqueous solution the glucose turns from beta to alpha through a linear form with different little reactions. This phenomenon is called mutarotation (ΔE). The linear form has an aldehyde group, it is why the Fehling’s solution react with them. The Fehling’s solution is a complex ( Cu(tart)2 ) with a Cu2+ ion which gives the characteristic blue colors. The complex oxidizes the aldehyde group to gives a carboxylic acid group, and the Cu2+ ion becomes a copper(I) oxide Cu2O which gives the characteristic red colors, as shown by the figure12.

Figure 12: Oxidation of aldehyde group of D-glucose with Fehling’s solution