You can also access this tutorial in the Developer guide: Generating a SAMSON Element.

This tutorial applies for SAMSON version 0.7.0 and higher. For an older version, please, check SAMSON School 2017: Introduction and installation of the SAMSON SDK. You can also check the documentation on the SAMSON Element Generator.

The SDK Element Generator is a very useful tool, provided with the SAMSON SDK, that generates source code for new SAMSON Elements that you can start from. The provided source code immediately compiles, and the compiled SAMSON Element runs as is (although it does not do much yet, and probably not what you would like it to do). Indications, in the form of comments in the source code, guide the development.

To generate a new SAMSON Element first you will need to add SAMSON SDK Element Generator. After adding it, launch SAMSON. If it was already launched, please, re-launch it so that the newly added Element can be downloaded by SAMSON and installed for you.

In the SAMSON menu, go to App → Developer → Generate a new element or click on the icon of the SDK Element Generator App in the App toolbar:

The first page (seen below) lets you enter the path to the folder where you develop SAMSON Element. For your first SAMSON Element, create an empty folder somewhere and indicate the path to it (hit the Browse button if necessary). This development folder may be distinct from the folder where SAMSON’s SDK is stored.
When you later create more SAMSON Elements, you may reuse this folder again. For convenience, once specified the path will be retained for the next time you run the Element Generator. 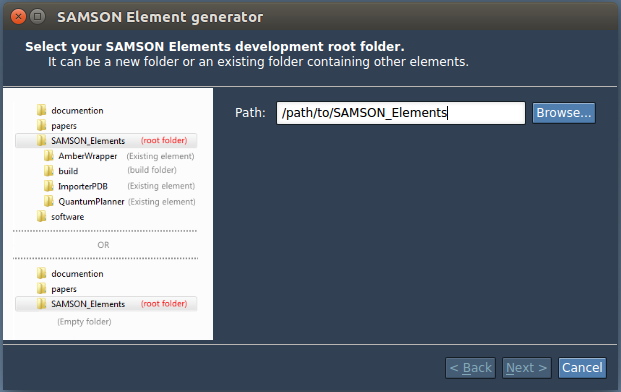 Enter the path to your development folder

The second page lets you enter the name of your new SAMSON element and its description. The name will be included in the names of generated classes, and should not contain any white space (these are automatically removed for you). Precisely, if the name of your SAMSON element is MyElement, all generated files will begin with SEMyElement (SE stands for SAMSON element). Both a name and a description must be entered in order to be able to move to the next page. When you are done, click next. 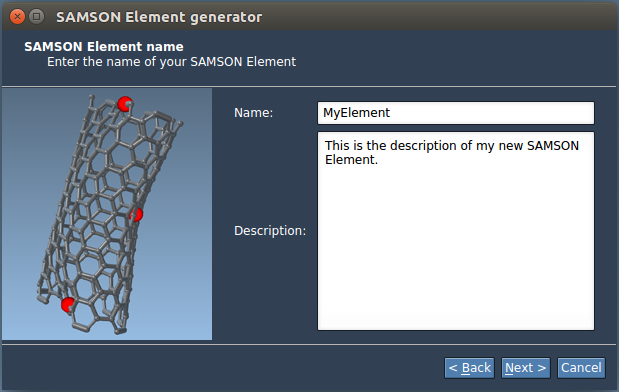 Enter the name and description of your new SAMSON Element

You may now add classes to your new SAMSON element thanks to the third page of the Element Generator (seen below). Choose the type of a class you want to add to your SAMSON element from the combo box. You can add one or several of the following types of classes (each one of them plays a specific role; please, check out the SAMSON SDK Documentation for more information):

As in the figure below, give each class a distinct name. The name will be part of the corresponding generated files. For example, if you call a class VisualModel, generated files will include SEMyElementVisualModel in their names. Hit next to reach the generation page. 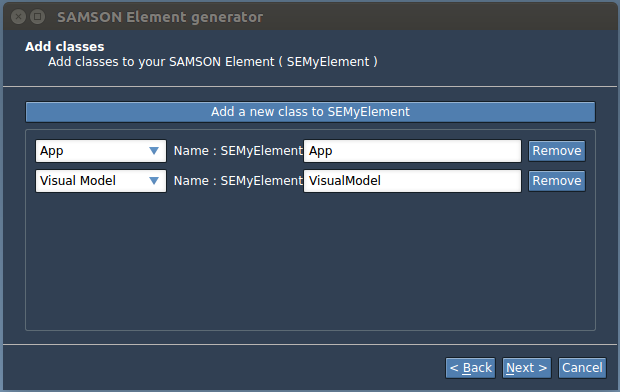 Add classes to your SAMSON Element

The generation page (below) is pretty simple to use, and only contains a Generate button. The window shows the contents of the folder where your SAMSON Element will be generated. 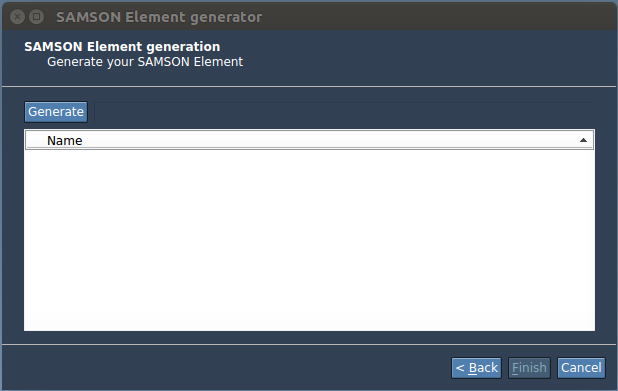 Hit the Generate button, and voila, the Element Generator creates a compilable, workable SAMSON element that you may now complete. 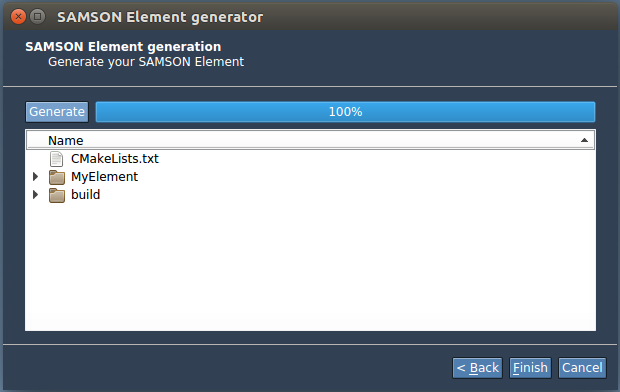 Congratulations, your SAMSON Element has been generated!

Each generated SAMSON Element folder contains at least six sub-folders (some empty), and a CMakeLists.txt file indicating to CMake how to build the SAMSON Element:

Translations are performed thanks to Qt’s internationalization mechanism, while icons are image files that you should replace in order to personalize your user interface. For example, the icon of an App is visible in the App menu and the App toolbar, while the icon of a Visual Model is visible in the title bar of its property window.

The generated code contains comments to help you complete functions. Search for “SAMSON Element generator pro tip” to determine which functions you may want to complete to achieve specific things.