For some years now, we have heard a lot more about nanostructures and especially about nanocarbons. You will see here the most famous nanostructures which are the graphene and the carbon nanotube…

You probably already know it, but for the two of you in the back who didn’t pay attention, we will remind you that it’s a plane of multiple six carbon cycles.

You might as well know of graphite. So what’s the difference between those two carbon structures?

In fact, graphite is just a superposition of graphene sheets. The bonds between the carbon atoms in graphene are pretty strong (covalent bonds) while between two sheets of graphene, the bonds are very weak. It’s a very promising material that was first extracted in 2004. And in 2010, the synthesis was rewarded with a Nobel prize (Geim & Novoselov) and became famous thanks to the well known experience of carbon exfoliation with duct tape which consists of deposing some graphite on a tape, folding it many times until you get just one single layer of graphite, which is graphene. You can try this for yourself with your pencil which is made of graphene powder (and some other stuff) and a piece of tape…

In fact, what gave them the Nobel price was more their proof that such a structure can exist. Because you have to realize that graphene has a thickness of one single atom!

Time to create some graphene!

We won’t ask you to create graphene, it’s an easy but long process, and not very interesting. Instead you can simply use this button:

. It automatically creates a graphene plane, but without bonds! Hopefully, there is also a simple way of creating multiple bonds. Yes, there is, you simply go to the document view and right click the structural model and you should see “create covalent bonds”. Tadaa!…

As for nanotubes, they were first synthesized by man around 500,000 years ago with the discovery of fire. Indeed some tiny amounts of nanotubes are created after combustion. But more seriously, these structures where first observed in the 70’s, but their interest really grew after a publication in 1991 of Sumio Iijima.

Now, let’s go to work on the graphene you’ve created, you will create a nanotube!

. It is called the “twister” tool. It’s used to bend molecules with immobile points you can define yourself. So set these points on the carbons of one side of your graphene like this:

Now, place a single point on a carbon of the opposite side and move it close to the first side so you can create a bond between two cabons of opposite sides.

Repeat this with all the other carbons so you can form a tube-like shape.

Finally, you can bind the carbons together, normally you should only make hexagons, and start a simulation with “Universal Force Field” settings. This is a “zigzag” conformation, but this is not the only one existing.

You can form an “armchair” nanotube by bending the graphene along the other side: 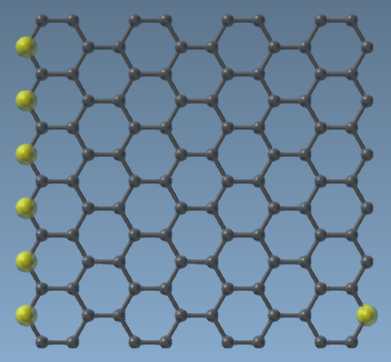 Note that in this shape the nanotube will conduct electricity as well as a proper metal.

As well as for graphene, there is a special module for nanotube creation:

This way you can easily create nanotubes of all lengths, widths and shapes:

(The second tube created is in the “armchair” configuration, the second one is a “chiral” type while the others are “zigzag”)

The fullerene, as well as the carbon nanotube, was predicted long before being observed for the first time in the 70’s-80’s. It’s a football-shaped molecule made of 60 carbons (12 pentagons and 20 hexagons). It’s named C60.

Notice that C60 is made of 12 pentagons of carbons and is the smallest “balloon” made of pentagons.

We could have told you to create one yourself, but it takes too long and is not interesting enough to be done here, however the structure itself is… So you will just have to open it.

As you know now, the files that SAMSON reads have the .pdb extension file. We won’t explain to you in detail what a .pdb file is, but just for your general knowledge it stands for “Protein Data Bank”. If you try to open one with a text editor, you will see that it contains what seems to be the coordinates of atoms and some other stuff.

In a previous activity, you saved a nano-car that had been generated with Samson. Your car was saved as a .pdb and if you want to, you can give it to a friend or share it on the web…

In fact, you can find molecules and atomic structures that others have created on the internet, so to give you an example, follow this link to download a fullerene and open it in SAMSON.

As for the diamond structure, you will just have to open it (for the same reason given above) and be amazed… well, if you can… More seriously, you can use the same link as above. You can change the camera to better observe the pattern and compare it to the graphite.

This activity was meant to show you the most famous nanocarbon structures, as well as some of the tools to create them.