Creation of a nanotube fabric: replication, modification of positions

Creation of a nanotube fabric: replication, modification of positions 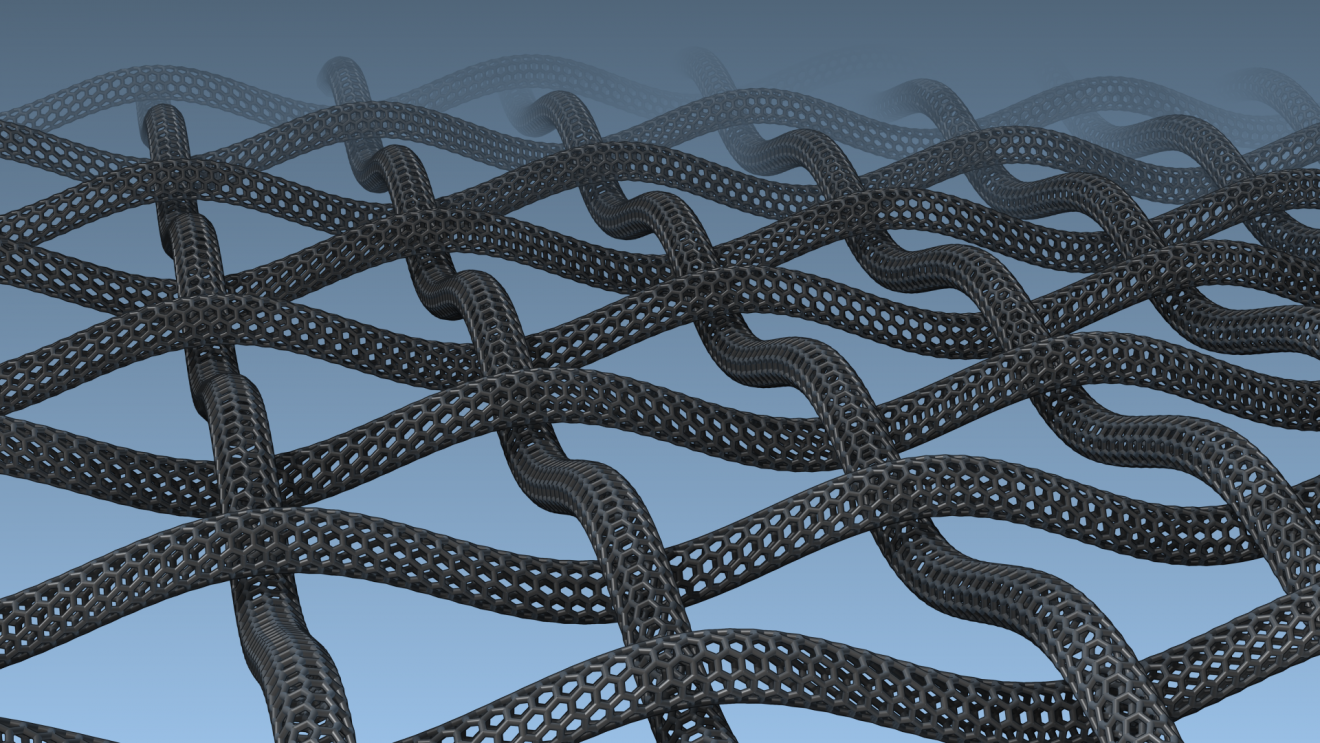 In this tutorial, we will weave a nanotube fabric, numerically, of course. To do so, we need to perform the following steps:

To create a nanotube, we will use the Nanotube Creator Editor (if you do not have it, you can add it via the provided link). 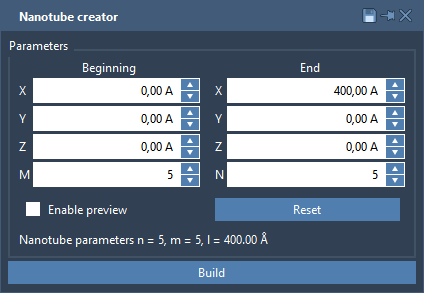 To generate a nanotube with the given parameters, press the Build button. 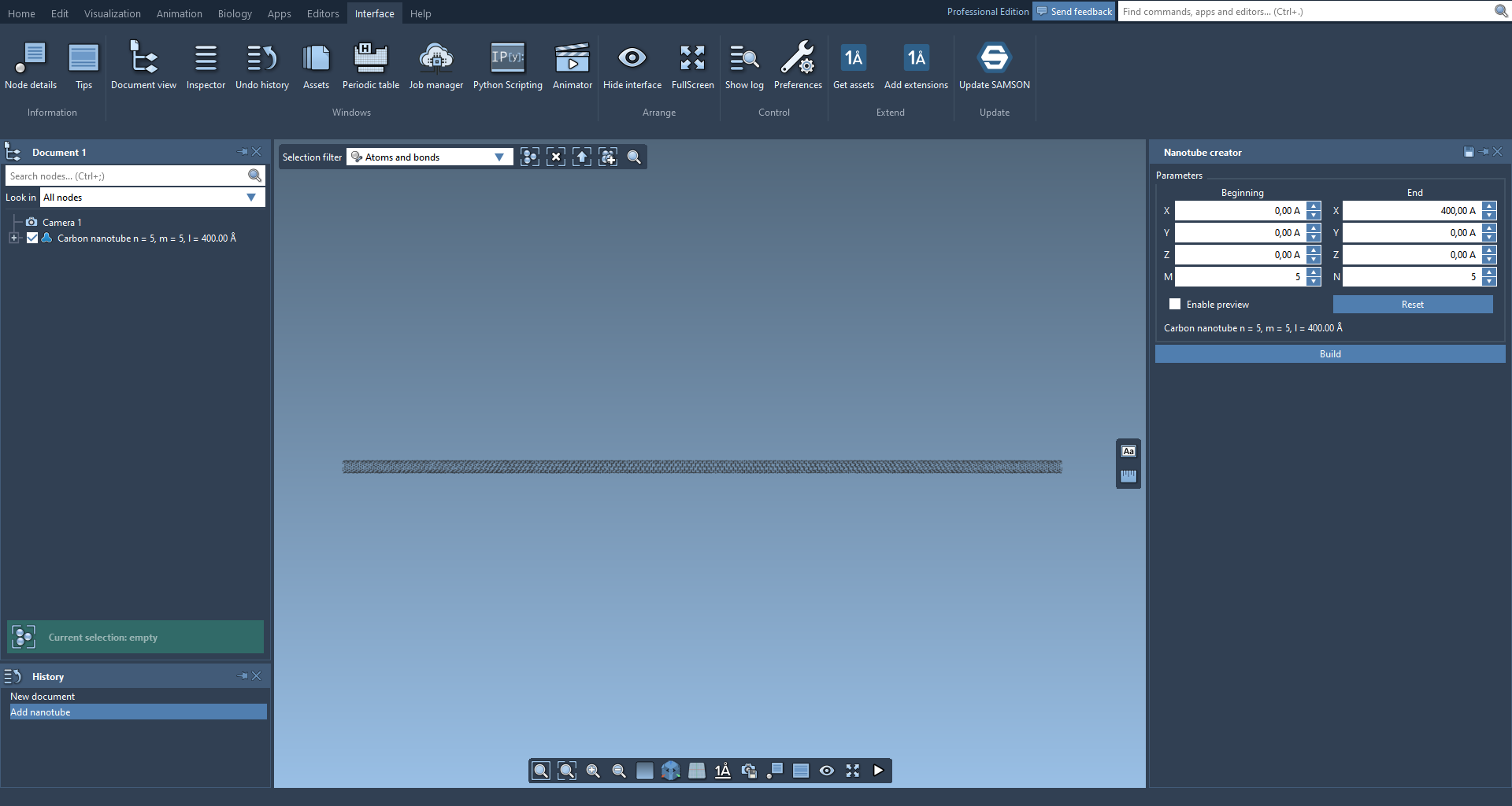 Now, let’s open the Python Scripting app. Let’s import the necessary functions and constants we will be using later.

Let us now create a nanotube fabric by replicating the created nanotube in XY-plane and modifying Z-coordinate of atoms in nanotubes to weave these nanotubes with each other.

Before setting up parameters for the fabric, we need to find a bounding box of the created nanotube:

We will be using the sine function for modifying nanotubes with its half-period set equal to the distance between nanotubes and an amplitude equal to 1.5 of the nanotube’s radius.

After doing that, we will get a set of nanotubes looking like this: 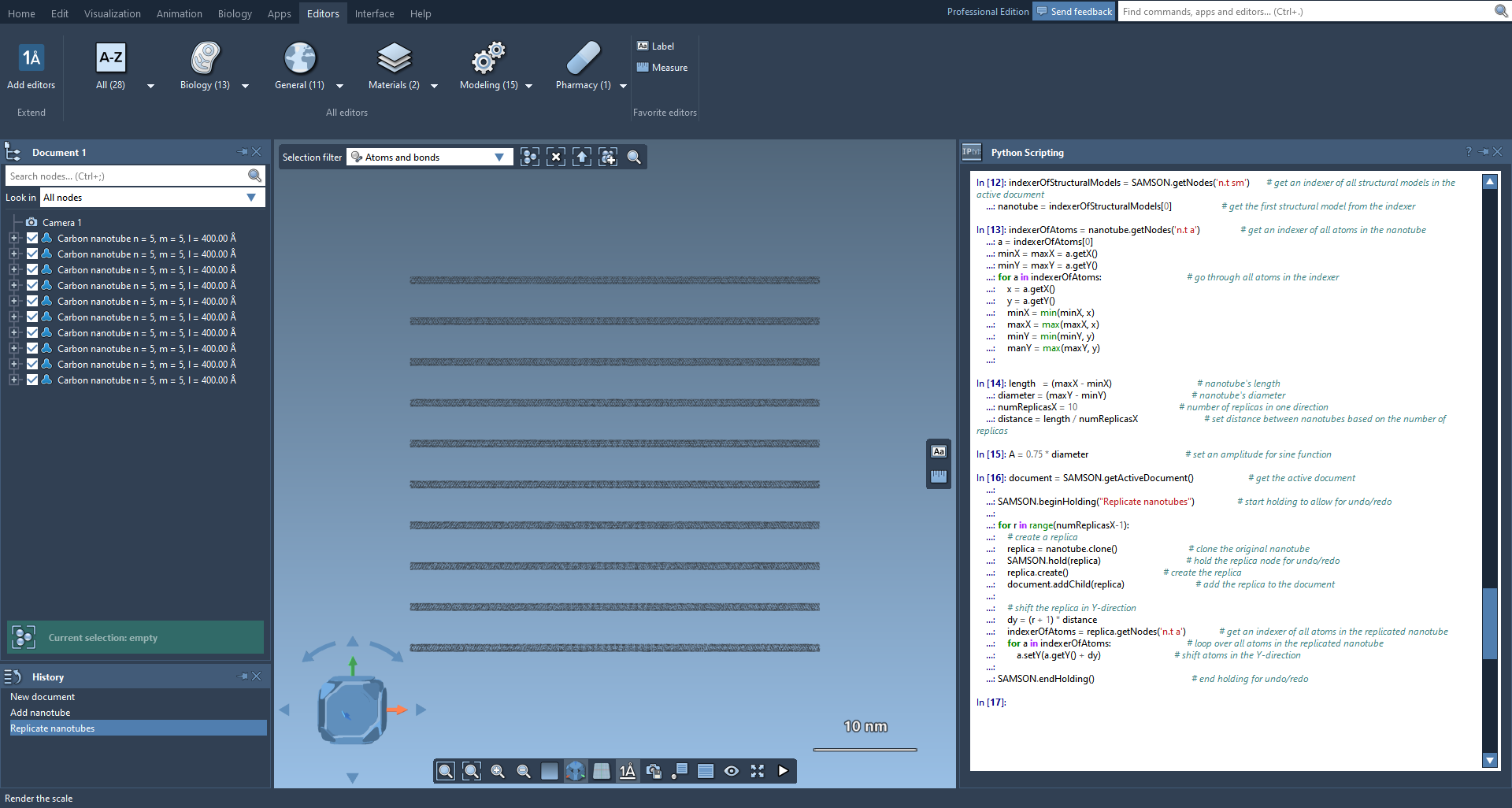 Now, we will replicate these nanotubes in the X-direction by copying them and rotating the replicas by 90 degrees. These replicas will also be shifted from the boundaries to have the # pattern. Then, we will apply the sine function in Z-direction to all nanotubes with changing its phase to have a weaved pattern.

After that, we will get a grid of nanotubes, where nanotubes are woven with each other. 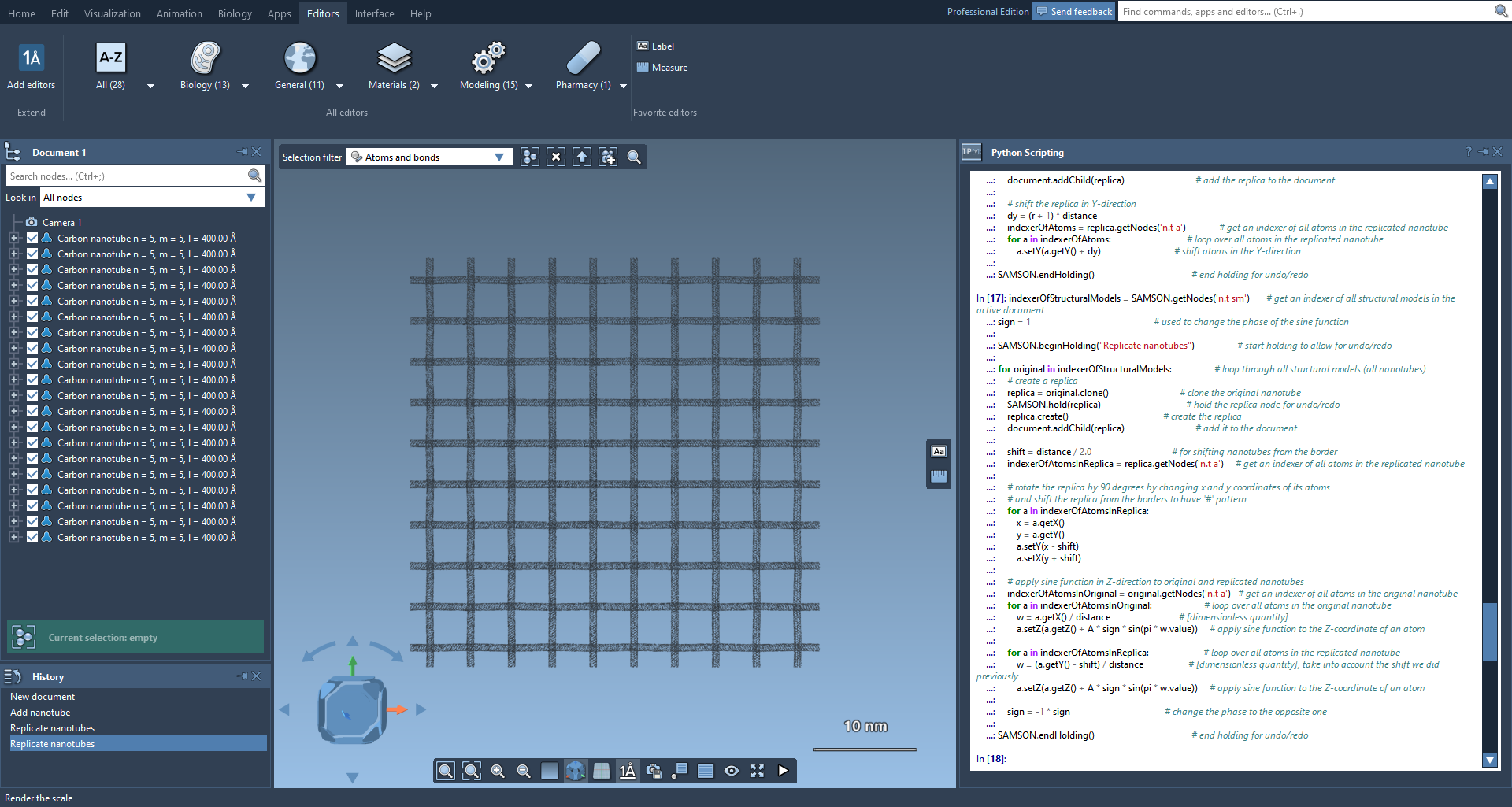 A close-up of the created system. For this picture, the default bond radius was set equal to the default atom radius in Preferences → Rendering → Structural model. 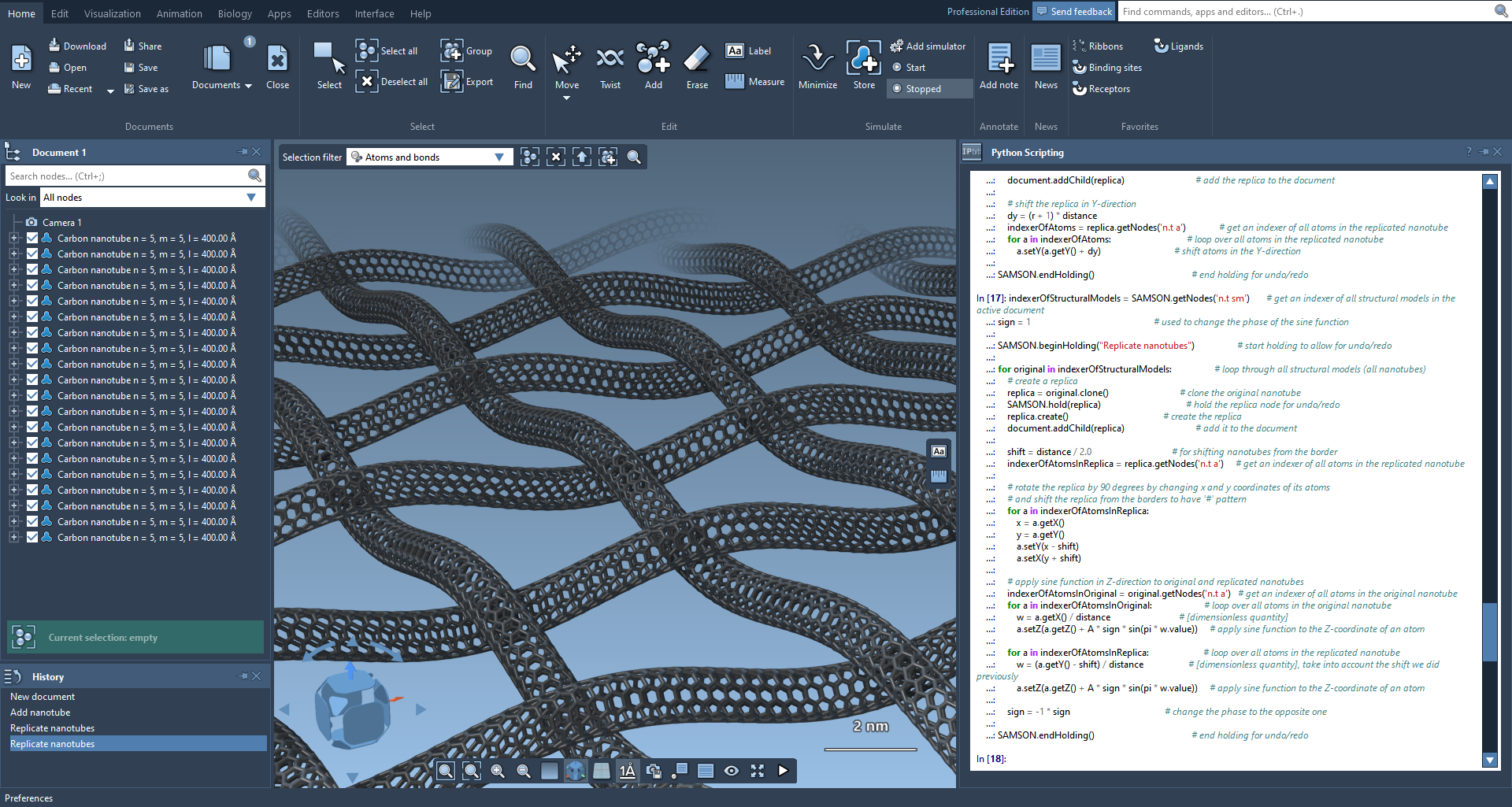 Of course, the created nanotube fabric should be later minimized.