Building a SAMSON Element on Windows

This tutorial shows how to build SAMSON Elements on Windows using Microsoft Visual Studio (MS VS).

The tutorial applies for SAMSON version 0.7.0 and higher. For an older version, please, check SAMSON School 2017: Introduction and installation of the SAMSON SDK.

If you experience any problems with building your SAMSON Element, please let us know on SAMSON-Connect forum.

If you have not installed SAMSON SDK, please, follow instructions from Installing the SAMSON SDK.

Configuration of a project in Microsoft Visual Studio

Once CMake is installed, generating a project for your development environment is straightforward. In this tutorial, we show how to configure a project for SAMSON Element in Microsoft Visual Studio (MS VS) 2015+ using CMake for the generation of VS project and solution from the command line. Microsoft Visual Studio 2017 has introduced a built-in support for handling CMake projects – you can create a CMake project with taking into account the information provided below.

This should generate a project for your development environment. In this example for Visual Studio, CMake generates, among others, the Visual Studio solution file SAMSON-Elements.sln that you can now open in Visual Studio. The Solution Explorer of Visual Studio should show the structure below: 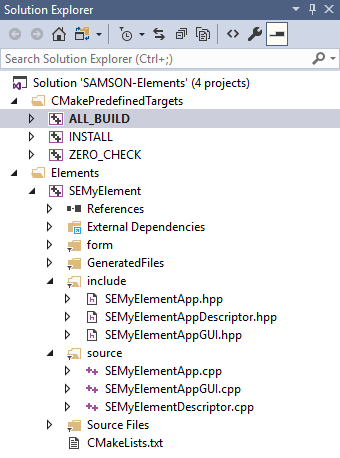 Adding files to your SAMSON Element

You may need to add files to (or remove files from) your new SAMSON Element (e.g. to add or remove classes, to wrap existing code, etc.). When you do so, you should run CMake again to regenerate a project for your development environment. One simple way to do this without having to open a command window is to slightly alter the CMakeLists.txt file located in the SEMyElement (e.g. add whitespace somewhere) and save it: when building the project (see the next section), CMake will detect the changes and update the project.

You may now check that your code compiles by either building the target corresponding to it (e.g. SEMyElement) or if your solution contains several SAMSON Elements and you want to compile them all at once, by building the ALL_BUILD target.

To be able to use your SAMSON Element, it should be installed in a specific SAMSON directory to make it available in your SAMSON installation. For that, open Properties of the solution (right click on the Solution ‘SAMSON-Elements’ and choose Properties in the context menu); for both Debug and Release configurations, in Configuration Properties → Configuration tick the build checkbox corresponding to the INSTALL target. Building the INSTALL target will automatically compile the code if necessary. 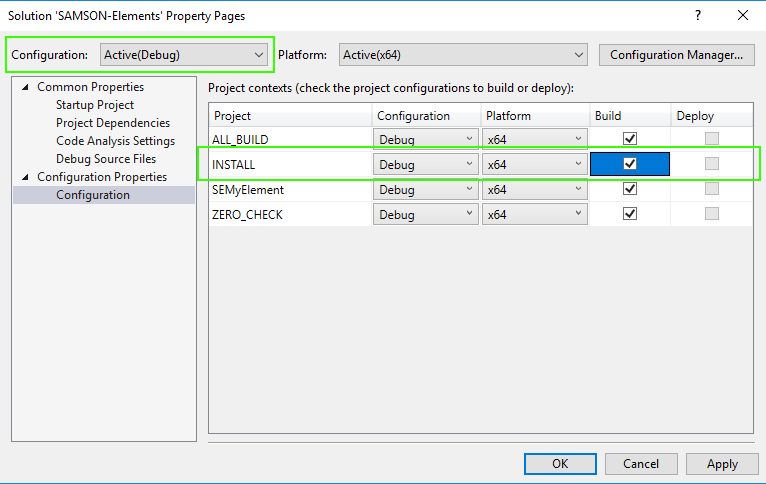 In order to let Visual Studio know which version of SAMSON to start, open the Properties of the SEMyElement target and enter the path to the SAMSON-Core executable for both Release and Debug configurations in Configuration Properties → Debugging → Command: 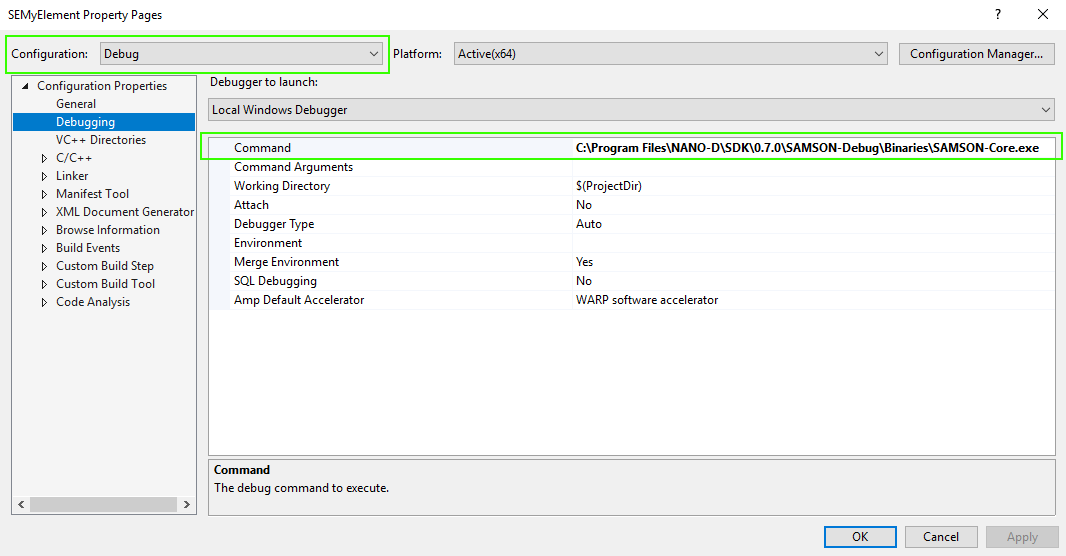 You may now indicate to Visual Studio that SEMyElement is the StartUp project: right click on SEMyElement in the Solution Explorer, select Set as StartUp Project in the context menu. When you start your project, with or without debugging (see the Debug menu), Visual Studio will start SAMSON.

Now you can build the solution (menu Build → Build solution or F7 or Ctrl+Shift+B) which will build all the projects including INSTALL, and then run the StartUp project (F5).