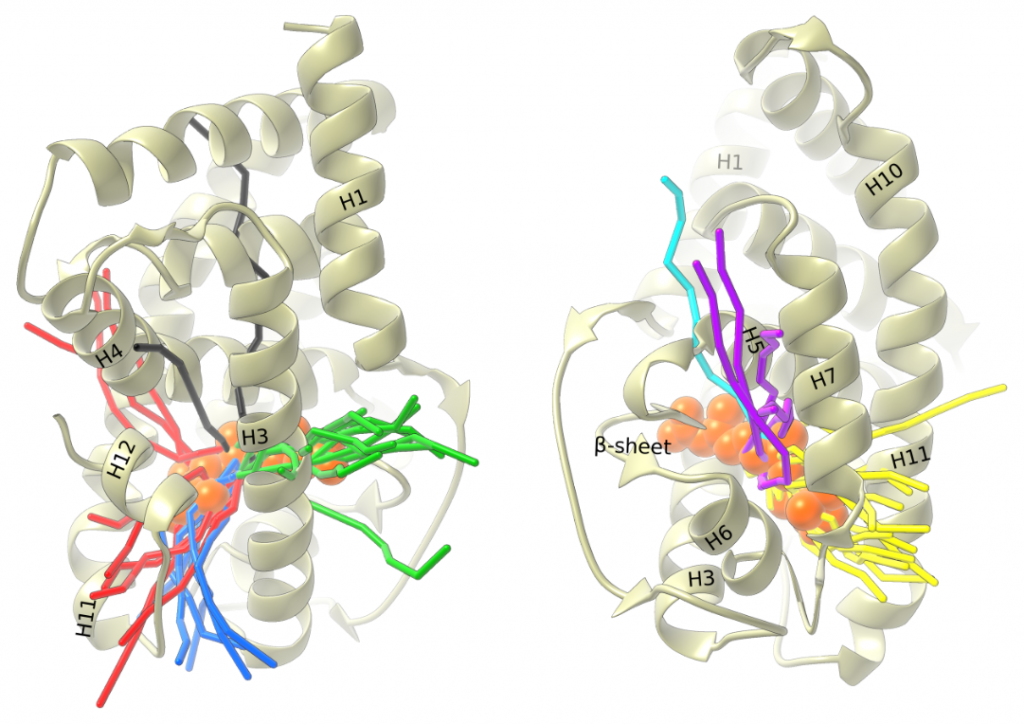 In this post, we will show how to use the Ligand Path Finder app for finding possible ligand unbinding pathways from a protein.

Before starting the tutorial, please, download the LigandPathFinder sample archive which contains necessary files for this tutorial. After extracting it, you will have a structural model (1pv7_ligand_complex.sam) and the topology files for energy evaluation with Gromacs (1pv7_ligand.itp, 1pv7_ligand_complex_topol.top, 1pv7_posre.itp).

Launch SAMSON. Load 1pv7_ligand_complex.sam. It will open a structural model of Lactose permease with its ligand Thiodigalactosid. In the Document View (if you do not see it, enable it in the Window menu, or press Ctrl+1), you can see the protein under the name Protein_chain_A and the ligand under the name TDG as shown in the picture below. You also can see one conformation named bound_minimized which is the minimized conformation of the protein-ligand complex. 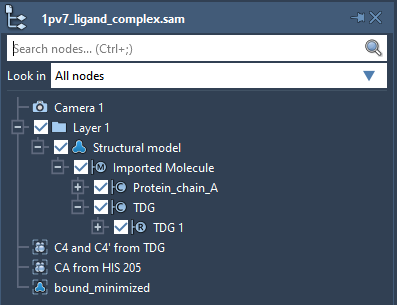 Visualizing the secondary structure of the protein 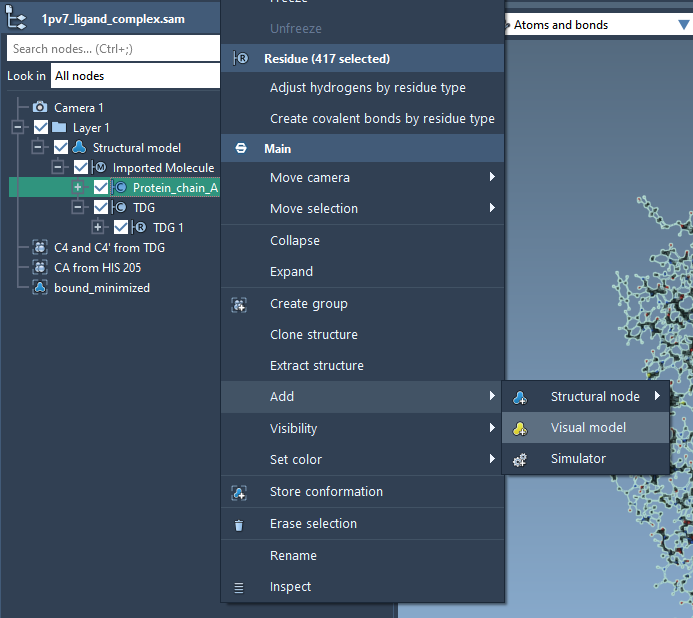 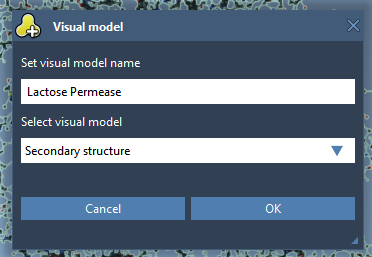 Let’s now hide the default ball-and-stick representation of the protein for better visibility by unchecking the box next to the Protein_chain_A in the Document View.

Open the Ligand Path Finder app by clicking on its icon

(you can also find it in the App > Biology menu).

In the app’s window, you can see two tabs: the Settings tab is for configuring the search and the Results tab is for visualizing results.

Setting up interaction and state updater models for energy evaluation

A window will pop up asking if you want to apply a new model, click Yes. The GROMACS force field setup will then ask for the topology file for the protein-ligand model. Click Browse and choose to open the file 1pv7_ligand_complex_topol.top provided with the structural model file. Keep the rest of the information in the window intact (see the figure below) then click OK. 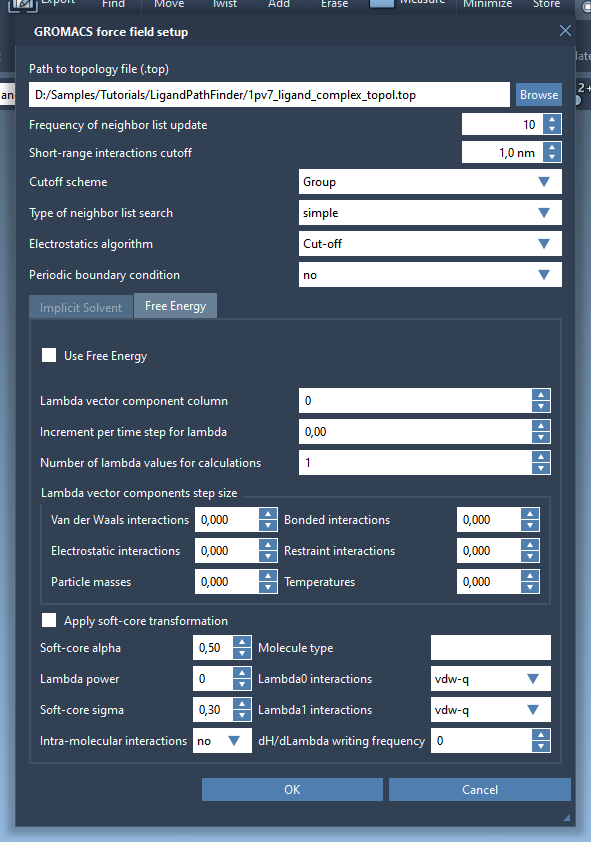 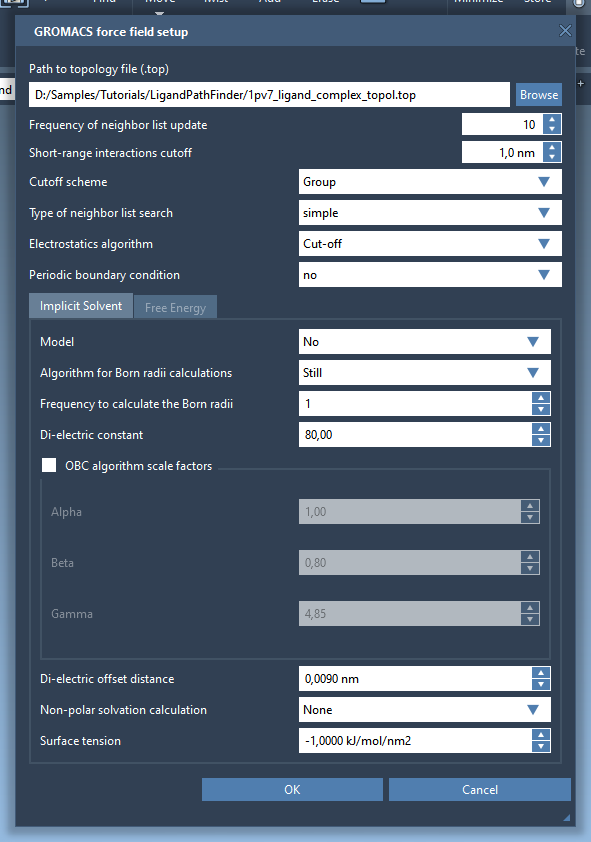 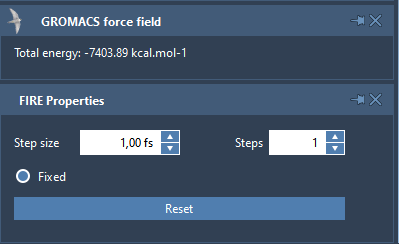 Setting up the system

Let’s now set up the system. Expand the Set up of the system box.

Defining the ligand and active and fixed ARAP atoms 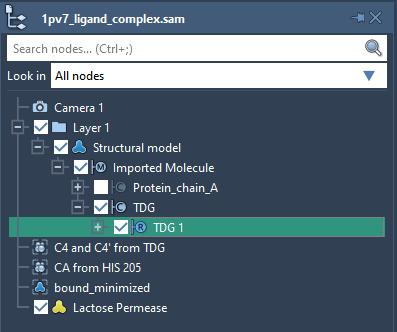 Then, in the App, click the Set button to set the ligand atoms.

The rest of the atoms will be considered as protein atoms.

In the Advanced information box, a new line should appear: “31 atoms set as ligand atoms”.

Defining the active ARAP atoms
Now we need to specify which ligand atoms will be considered by the ARAP method as active atoms used for controlling the ligand motion. The motions of the rest of the ligand atoms (also called passive ARAP atoms) will follow these two active atoms. Let’s choose two Carbon atoms from the TDG ligand: C4 and C4’. For simplicity, the document contains a group named C4 and C4′ from TDG that refers to these atoms. In the Document view, double-click on this C4 and C4′ from TDG group. This will select nodes in the group, i.e. the C4 and C4’ atoms. 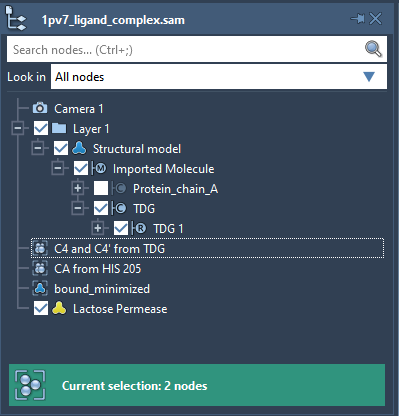 Then, in the App, click the Add button to set the active ARAP atoms.

Defining the fixed ARAP atoms
Finally, we need to specify which protein atoms will be considered by the ARAP method as having a fixed position. This is to ensure that the protein will not drift along with the ligand (note that this choice may influence the resulting unbindings pathways, so in general you should choose atoms from parts of the protein that are expected to be rather static).

Let’s choose the CA atom in the Backbone of HIS 205 residue of the protein as the fixed ARAP atom. For simplicity, the Document has a group named CA from HIS 205 that refers to this atom. In the Document view, double-click on this group to select the corresponding atom. 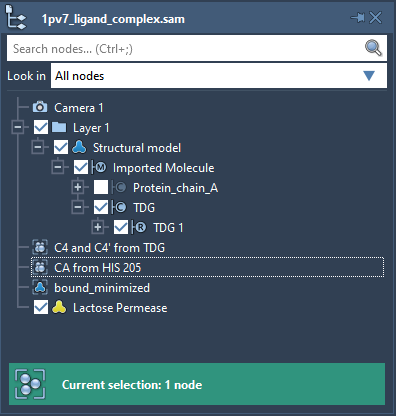 Then, in the App, click the Add button to set the fixed ARAP atom.

In the Advanced information box, you should see the number of added active and fixed ARAP atoms.

During the setup of the system, a new visual model should appear for showing the sampling box and atom types (blue for passive ARAP atoms, green for active ARAP atoms, and red for fixed atoms). 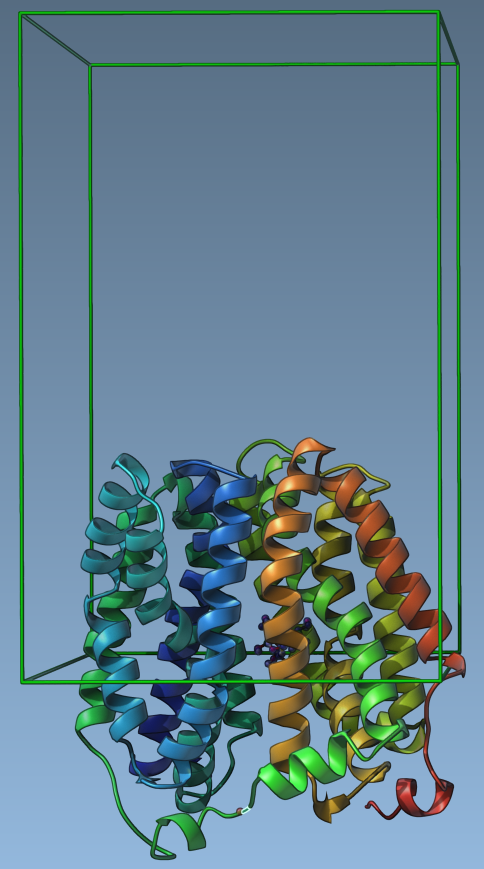 Let’s now define the parameters. Expand the Set parameters box and set them as in the following figure:

Running, Pausing, or Stopping the planner

Once you set up the system, the sampling box, and specified the parameters, you can launch the search for ligand unbinding pathways.

Click the Run button to start the planner. The search process can be paused by clicking the Pause button and resumed after that by clicking on the Resume button (these buttons are located at the same place as the Run button while the planner is running). To stop the process, click the Stop button.

As soon as a path is found, it is added to the list in the Results tab. For example, the following figure shows two paths found.

Each path contains the following fields

Viewing conformation energies along the path

To view the energy curve of the path, select a path by clicking on it in the path table. To plot several energy curves, select several paths (Ctrl / Cmd + left-click for multi-selection). After selecting a path, you can move the slider to see a particular conformation in the path as shown in the picture below. The corresponding conformation is reflected in the structural model in SAMSON and its corresponding energy is shown in the GROMACS force field window. 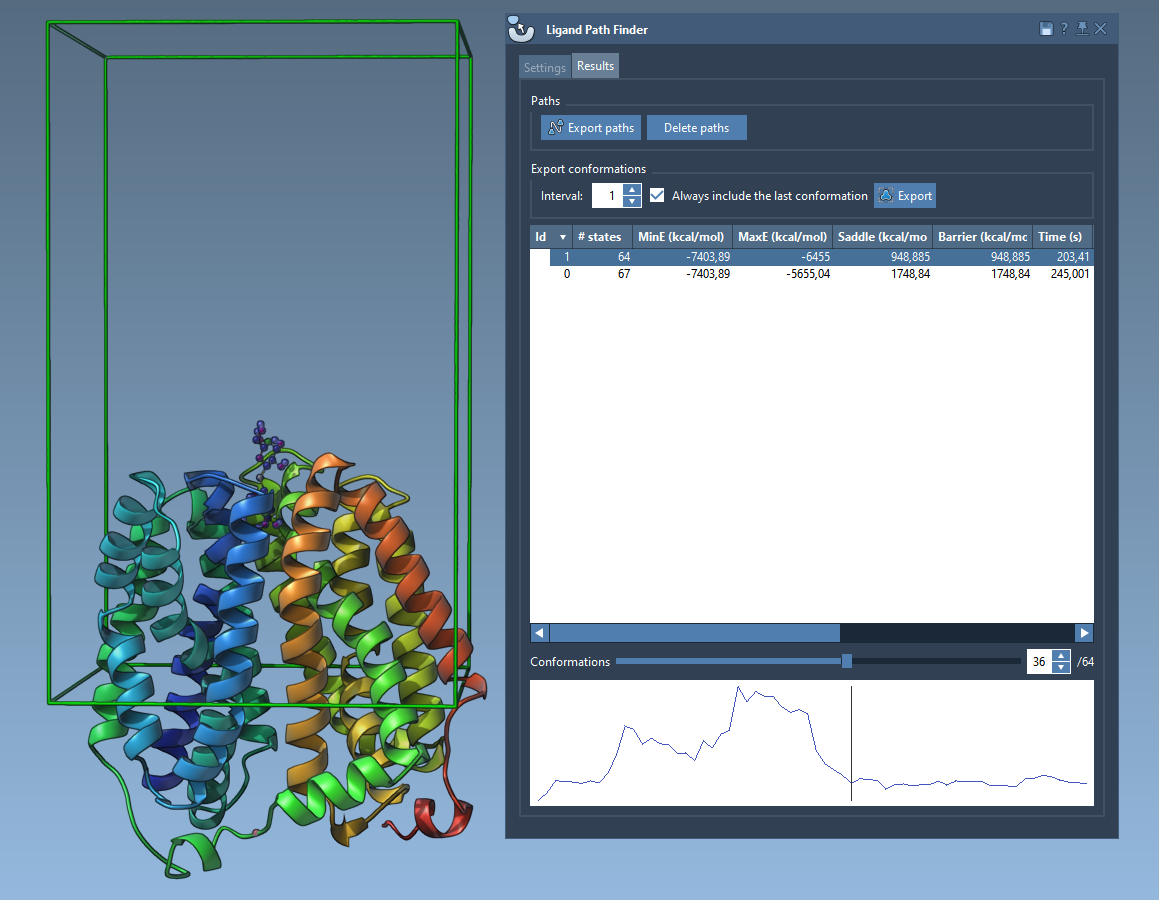 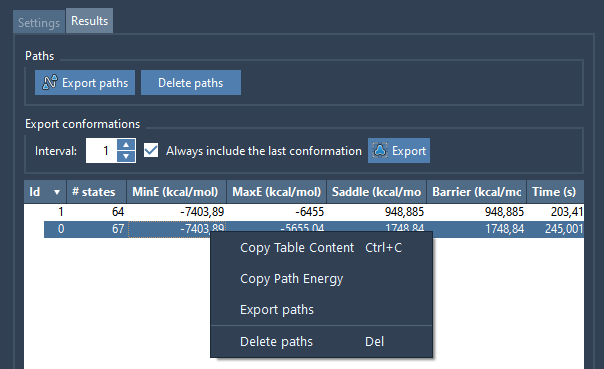 To export paths from the path table into the document, select the paths you are interested in and press the Export paths button.

You can delete paths by selecting them in the path table and clicking the Delete paths button.

To export conformations along the path into SAMSON, select the paths from the path table, choose the export interval and click the Export button.

Check the Pathlines tutorial to learn about how to create pathlines, for example to visualize the movement of the center of mass of a ligand.

The resulting paths can be significantly improved with the help of the parallel Nudged Elastic Band (NEB) method implemented in the P-NEB app. Please check out the P-NEB tutorial for more information.