Molecular Box Builder makes it possible to construct systems by inserting molecules in a box or filling a box with molecules. 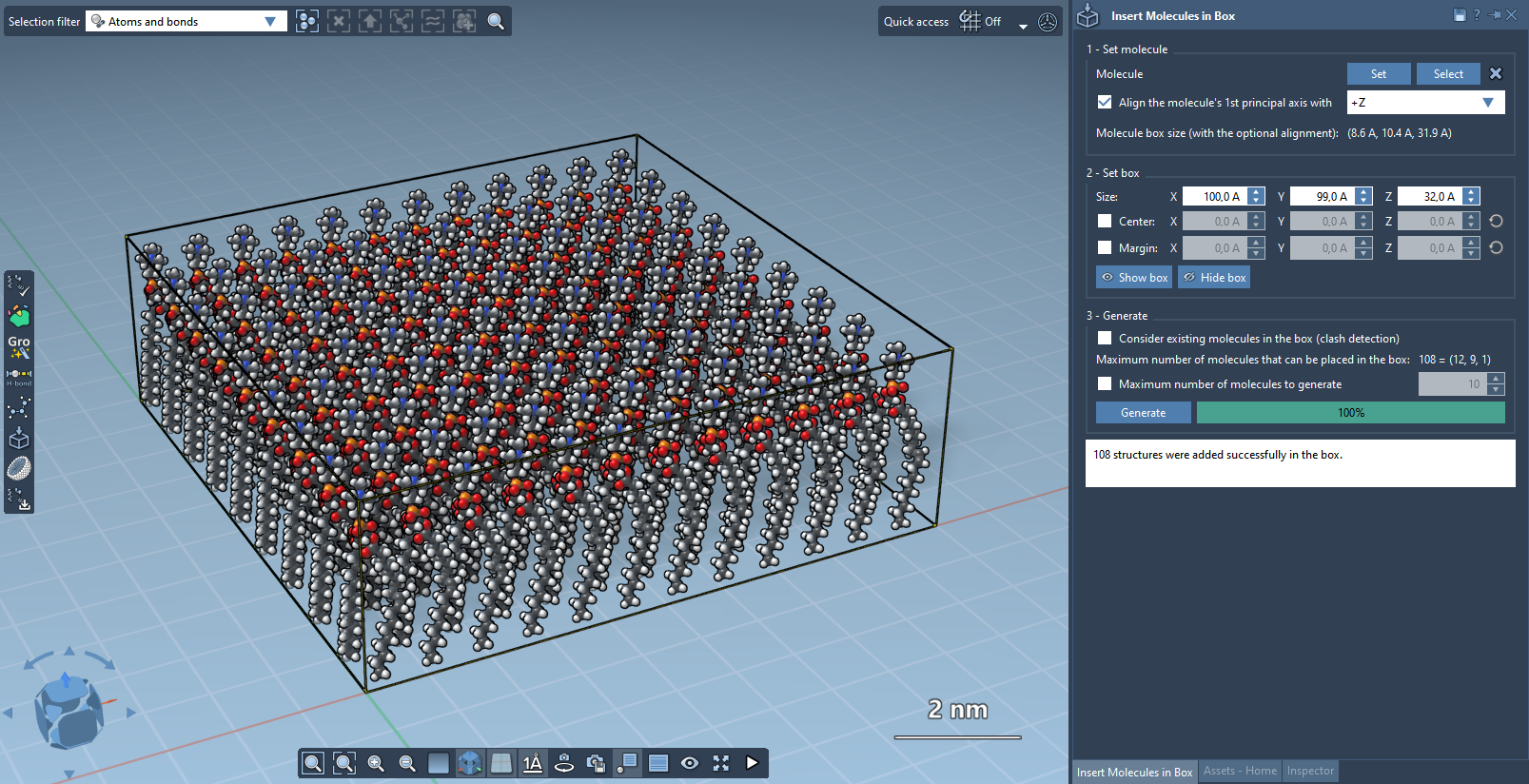 The Molecular Box Builder app can be found in the App menu > Assembly or via the “Find everything” (Shift+E) in the top-right corner of SAMSON.

Select a system with which you would like to populate a box in the Document view or in the Viewport. The system can be a single molecule or a set of molecules (structural models, molecules, chains, structural groups, residues, or atoms). Click on the “Set” button.

Click the “Select” buttons to highlight the structure or start/end atoms.

Click the “X” button to clear the currently set molecule.

You can specify how to align a molecule when adding it to the box. If no alignment is chosen, then the molecule will be duplicated in its original orientation. When alignment is chosen then it aligns the molecule’s first principal axis (the first eigenvector of the moment of inertia) with the chosen axis direction. Note that you can choose, for example, +X/-X to change the orientation along the axis.

The molecule box size is automatically computed based on the bounding box of the molecule in the chosen alignment or in its original orientation if no alignment was chosen.

Specify the size of the box. By default, the box is positioned in such a way that its corner is aligned with the origin.  If you want to move the box, check the “Center” option, and move the center of the box.

The molecule will be placed in the box such that there will be no clashes between them. If you would like, you can specify the margin between the molecules – it can be positive or negative.

When you change the size of the box or the margin between molecules, the predicted number of molecules that can be placed in the box in each direction (and their total number) is updated in the Generate part.

You can always show/hide the box by pressing the corresponding buttons.

The predicted number of molecules that can be placed in the box in each direction (and their total number) is shown in the Generate part.

To generate a system, press the “Generate” button. Depending on the size of the system, the generation should take a few seconds. 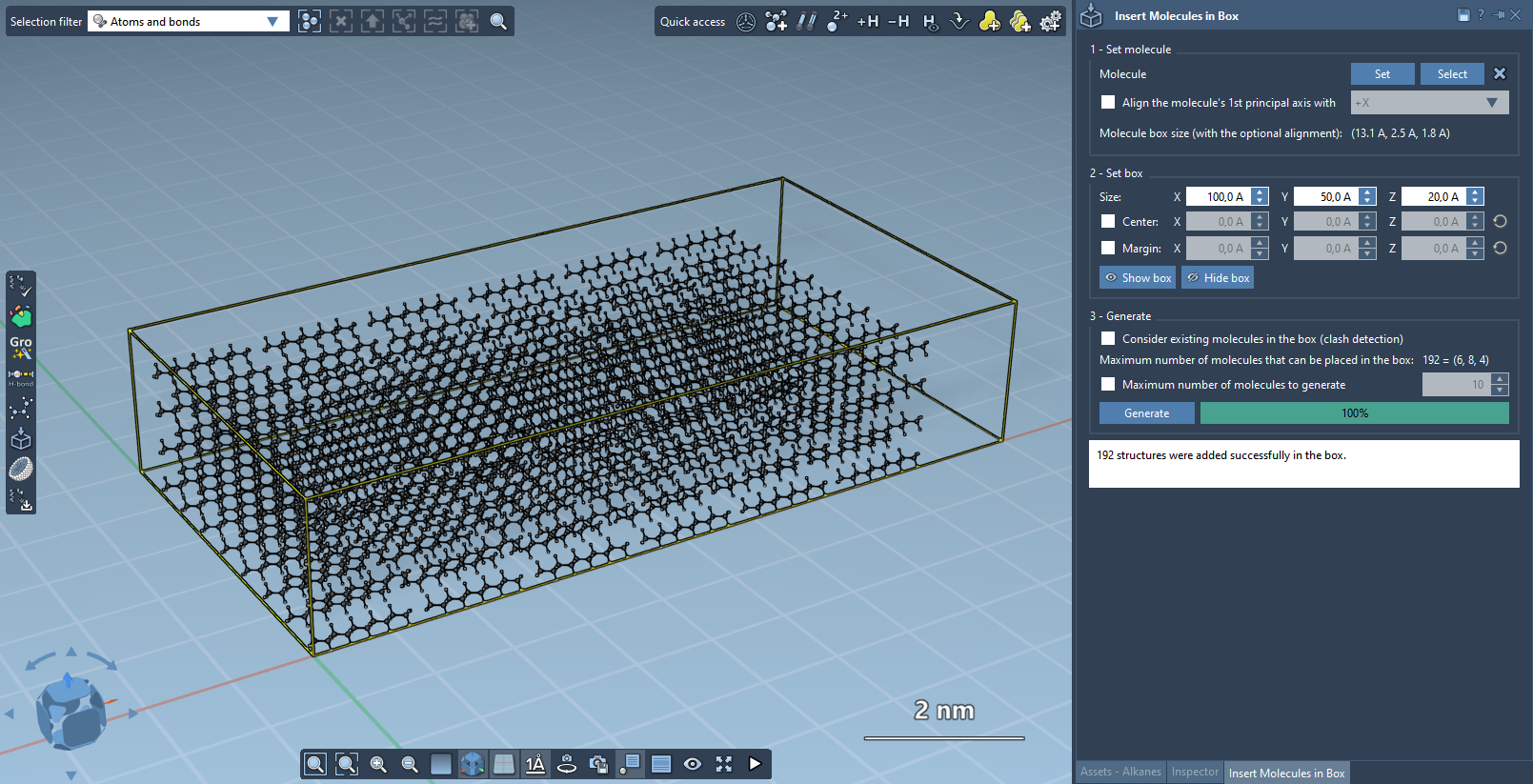 Generating a lipid layer around a protein

This app can also be used to generate lipid membranes around proteins. Let’s for example build a single layer of lipids around the copper-transporting PIB-ATPase (4BBJ).

Now, import a lipid. Then select it and set it as the molecule in the Molecular Box Builder app and choose to align its principal axis with the Z axis (e.g., +Z).

Now, we need to specify the box. Set the size of the box and click to center it and move the center to position the box where you would like lipids to be generated with respect to the protein. You can also specify the margin between the inserted molecules if needed. Note: the predicted number of molecules that can be placed in the box in each direction is shown in the Generate part.

In the Generate part, choose the “Consider existing molecules in the box” option to not put lipids on top of the protein. 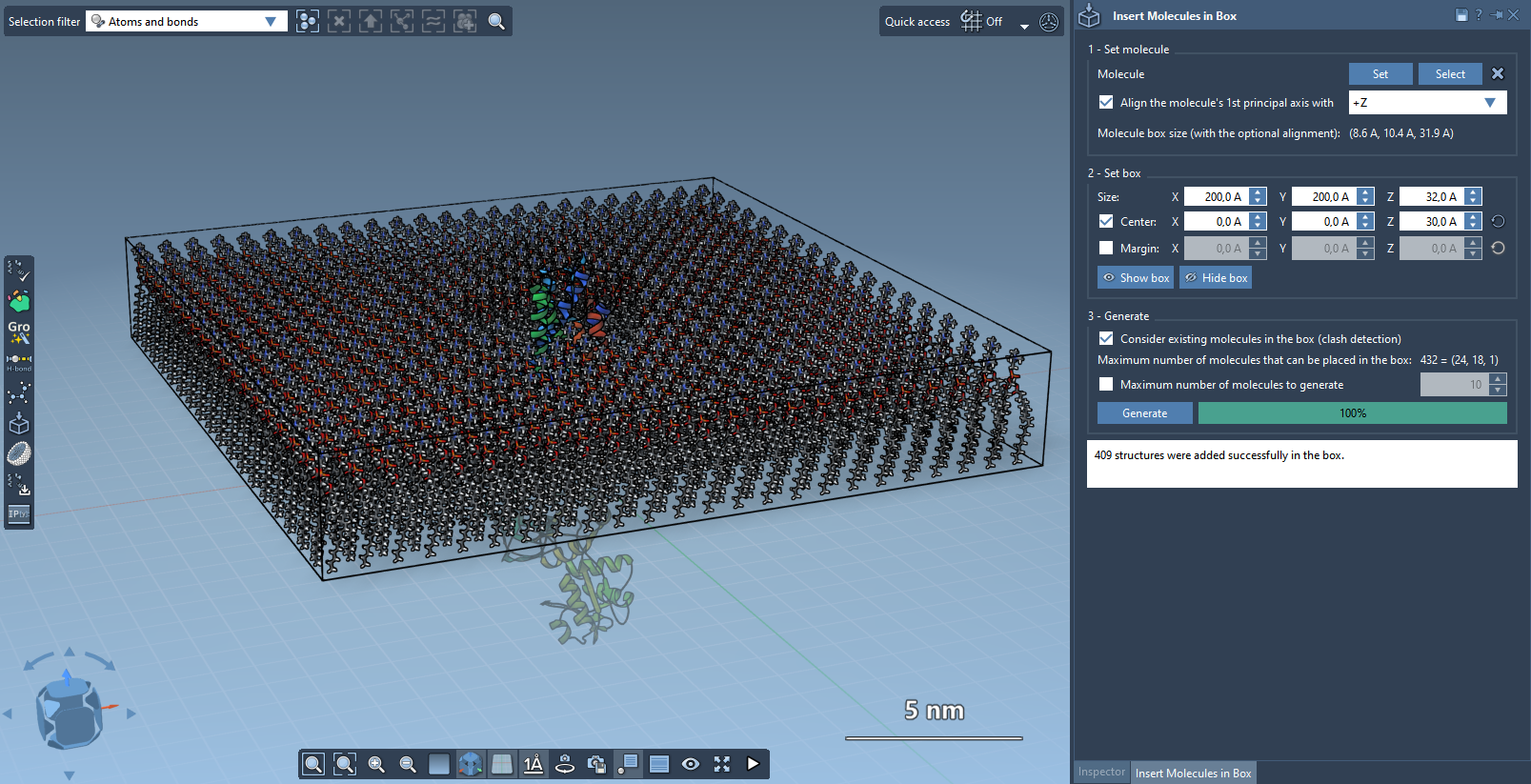 And you should have a single layer of lipids around the protein.

If you would like to create a lipid bilayer, then, first, add one layer with e.g. +Z alignment of molecules and then add another layer with the center of the box shifted in Z-direction with the opposite alignment (e.g., -Z).

Note: you can always move and rotate the system in SAMSON using the Move editors.

If you have any questions, please do not hesitate to contact us via our forum.